Build Your Own Star Tracker

This article originally appeared in the Jan/Feb 1997 issue of SkyNews (www.skynews.ca)

I've always been an arm chair astronomer. "One of these days," I would say, "I'll take the plunge and buy a good telescope and take some really great pictures." But when comet Hyakutake swept through our part of the solar system last March, I discovered that you don't need a telescope at all to take pictures of these magnificent heavenly travellers. All you need is a tripod, a regular 35mm camera with "bulb" exposure setting, and an afternoon with some hand tools and hardware, to build yourself a "barn-door" camera tracker.

A Homemade Mount for Guided Astrophotos 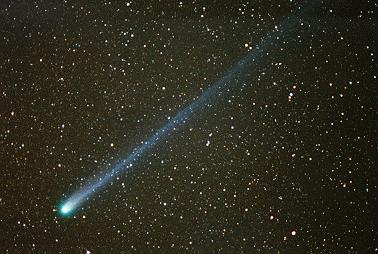 Although the device has been around for years, I was unaware of it until I met Andrew Seffinga, from Athens, Ontario, who took this beautiful picture of Hyakutake from his backyard. Note the sharp stars--no star trails. The barn- door tracker cancels the effects of the Earth's rotation by moving your camera at the correct speed to keep pace with the stars. Nothing fancy here: the tracking is done with a hand crank!

At first I was sceptical that something which seemed as crude as a hand turned screw could actually do the job, but the proof is in the pictures. In this age of high priced, computer controlled, CCD-imaging, multi-thousand dollar telescopes, you might feel reluctant to try astrophotography. But this little gizmo works. In fact, the high magnification of a telescope is exactly what you don't want when you are photographing a comet. A normal camera with a typical 50mm lens gives you the wide field of view needed to capture the sweep of a comet's tail or the majesty of the Milky Way.

If you decide to make your own barn-door tracker, do it soon, and take some practice shots. Then when Comet Hale-Bopp arrives this spring, you'll be ready for it.

Of course, you'll need a camera tripod to hold and orient the tracker. I suggest a reasonably heavy-duty model to avoid blurred photos from a jiggly tripod. Your photo dealer will have the ball-head clamp needed to hold the camera at any orientation atop the tracker. Apart from these two items, the materials are very inexpensive.

The drive bolt is a 4 inch x 1/4 x 20 carriage bolt available in any well- stocked hardware store. And you'll need two smoothly swinging door hinges and two pieces of 3/4 by 10 by 12-inch plywood. Two 1/4 by 20 T-nuts are the only specialized hardware required.

Cut the plywood pieces into two "T" shapes and join the tops of the T's with the hinges. The only crucial measurement is the position of the hole that contains a T-nut which holds the drive bolt. It should be 11 7/16" from the hinge axis.

To secure the barn doors to a standard camera tripod, the bottom leaf of the barn doors needs a 1/4 x 20 threaded hole, like that found on the bottom of cameras. Attaching the other T-nut here does the trick. Be sure to countersink the T-nut from the top, so the tripod pulls the T-nut down onto the bottom board. Speed-bore bits do a nice job of drilling large flat-bottom holes.

A four pointed handle constructed from one of the cut out scraps makes turning the drive bolt at one rotation per minute easy. Adequate accuracy is achieved by gently cranking the drive bolt clock-wise a quarter-turn every 15 seconds. This moves the top board in the direction necessary to compensate for the Earth's rotation. Mount the ball head on the top board, raising it a few inches to give some clearance behind the camera and for sighting through the viewfinder.

The idea behind the barn-door tracker is to compensate for the Earth's rotation, just as a telescope's equatorial mount does. To work properly, the axis of the hinges must be aimed at polaris, with the drive bolt on the right as you face north. As a sight for this alignment, mount a 1/2 inch diameter tube beside and parallel to the hinges. A skinnier tube, such as a fat soda straw, would be more accurate but would also difficult to sight through. Variations on gun sights also work.

A small digital clock illuminated by a dim flashlight fixed to the tracker allows you to keep track of the time and to concentrate on cranking the drive bolt. A flashlight can easily be constructed with a battery holder (two AA cells), wired in series with a snap-top, a 100-ohm resistor and a Radio Shack Red Super-Bright LED. (part # 276-088) Use stiff wire so you can position the LED. A switch is not necessary as you can just remove the snap-top connector.

Now you are ready to direct your camera at any segment of the sky, and take pictures! Use a fast film, 400 to 1000 speed, and keep a record of what you do, so you can improve your technique in the next session. Time exposures of 2, 5 or even 10 minutes are possible, with the stars remaining as points rather than trails. Lenses that are 50mm or shorter in focal length will produce the best results, because they are more tolerant of tracking errors. Shoot at f2 or f2.8, and use a cable release to trip the shutter for the time exposure.

It comes in convenient 12-shot rolls and records loads of stars. Judging from Andrew Seffing's shot of Comet Hyakutake and other nice portraits of the comet published over the past few months in SkyNews, it is a super comet film.

For a lot more technical details, you can visit: http://www.skypub.com/comets/cometpix.html